The League of Failure 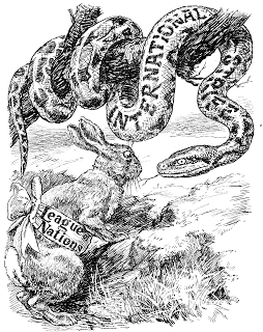 (Click for larger view)
Weak – the League’s ‘powers’ were little more than going ‘tut-tut’. Sanctions did not work.   It had no army.

America – the strongest nation in the world never joined.   Britain and France were not strong enough to impose peace on their own.

Structure – the League's organization was muddled, so it took ages to do anything.   Members couldn’t agree – but decisions had to be unanimous.   This paralyzed the League.

Depression – the world-wide Depression made countries try to get more land and power.   They were worried about themselves, not about world peace.

Unsuccessful – the more the League failed, the less people trusted it.   In the end, everybody just ignored it.

Members – the League’s main members let it down. Italy and Japan defied and left the League.   France and Britain betrayed it.

Big bullies – in the 1920s, the League had been quite successful with small, weak countries.   In the 1930s, powerful countries like Germany, Italy and Japan defied the League.   They were too strong for the League to stop them.    (source:
Weak – the League’s ‘powers’ were little more than going ‘tut-tut’. Sanctions did not work.   It had no army. 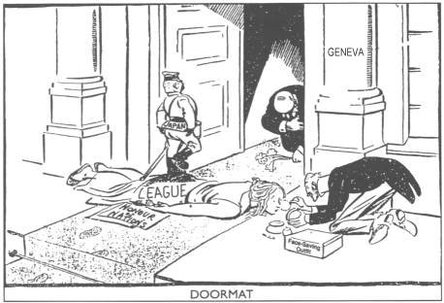 Japan walks all over the League and ruins the League's reputation.(Click for larger view)
Japanese imperial army attacked Manchuria after a dispute broke out near the Chinese city of Mukden. Japan took over Manchuria within 5 months. U.S. and western powers at loss on how to respond to the incident. U.S. interest in the area wasn't enough for military intervention. To retain power in Manchuria, China appealed to the League. The League responding with per-arranged process of arbitration. The resolution calls for Japan to withdraw troops from Manchuria. Japan ignored the League  and continued to expand with negotiations and diplomatic efforts to solve the crisis continued. Commission report states Japan must leave Manchuria.In the end, the League failed to impose sanctions or collective military actions, mostly because Britain and France were worried of their colonies being attacked. 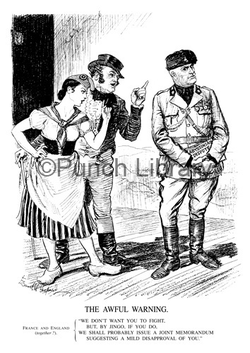 (Click for larger view)
In the 1930s, Mussolini was eager to increase the size of Italian Empire because it would:
+ Provide  much needed materials for Italian industries and military
+ Increase Empire and add national pride and prestige
+ Expand population
October 3, 1935, Italian troops invaded Abyssinia. Haile Selassie I, Emperor of Ethiopia appealed to League for help. However, the League decides no penalties because Britain and France wanted to maintain a good relationship with Italy fearing that Italy might side with Germany. Later it decide to impose limited sanction to Italy as a way to kind of slap it on the wrist for misbehaving. The league failed to sanction Oil and Petroleum which would have stopped Italian mobilization and efforts to continue the war. Furthermore, Great Britain failed to shut down the Suez Canal which who have stopped Italian mobilization to Ethiopia.

"It is us today, it will be you tomorrow."